I just wanted to write a short blog to say a massive THANK YOU to everyone who has been watching my #happydiabeticchallenge insta stories so far! I have been overwhelmed with all the views they have received and all the wonderful messages people have been sending me regarding them.

I had no idea that my videos were sparking so much interest for people! So many people have said that they are learning things from my videos, which is fantastic because I am always wanting to educate others about type 1. I have had loads of friends telling me that they can’t wait to watch them every day and see what I have to say about each topic. A few friends have also said that it’s so great to see me talking so openly about various diabetes related topics too. I must admit though, it’s really difficult to get everything I want to say in some of the videos because they’re only 15 seconds long!

I’ve also received the most wonderful messages from fellow diabetics who are really appreciating what I have to say. I received the most thoughtful message from a lovely guy called Greg (@gregreekie90 on Instagram) who said that my stories have been inspirational. Wow! For me, knowing that I can make a difference to just one person is extremely humbling. It’s great to know that my videos are inspiring others! It just goes to show that talking about type 1 diabetes really does make a difference! 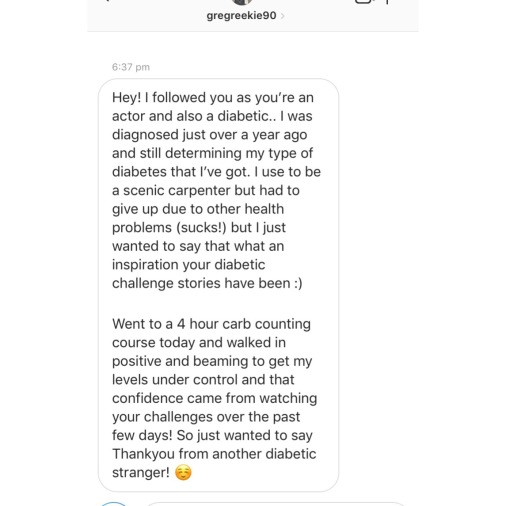 So far I have talked about the following topics:

Later today I will post another video about exercise and diabetes, so make sure you check it out!

On another note, it’s my birthday on Saturday! I can’t wait! However, it has felt a bit odd this year because I’ve been so busy and had an awful lot to do in the run up to heading off to Clacton for Panto. I am working during the day at PQA (Pauline Quirke Academy) but on the night I’m going to have a lovely meal with Bobby and hopefully quite a few glasses of prosecco and wine! (I’ll keep that blood sugar in line though!)

On a further note, I attended one of our Panto publicity days last Saturday too, which went very well. We performed a few songs at the Victorian Christmas Market which was actually held in the Princes Theatre (where the show will be playing) in Clacton and then we headed off to Colchester Hospital to visit some lovely children on the pediatrics ward. It’s never nice to see children in hospital, however they seemed pleased to see the arrival of 4 strangely dressed characters walking up to their beds!

My next few blog posts will be following the progress of Panto rehearsals and the show so fingers crossed it all goes well! I’ll also be 28 when I write the next one! Where has the time gone?!